Timbre is a critically acclaimed app for editing audio

files. It allows you to cut, join and convert audio or video files. It is completely free 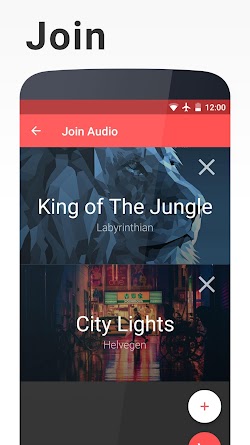 Timbre allows you to perform many kinds of operations on your audio or video files. Among the most popular are:

: Want to join audio files? Or perhaps merge videos? Timbre lets you seamlessly join mp3 songs or join videos together, combining as many files as you like into one.

: Want to convert a wav to mp3? Or perhaps a flac to m4a? How about an mkv to mp4 or avi? With Timbre, you can quickly convert audio and convert video files to and from many formats including mp3, wav, flac, m4a, aac & wma for audio and mp4, flv, avi, mkv, webm & mpeg for video. (For example: Timbre has a devoted mp3 cutter)

: Want to take out the audio from a video? Timbre includes a high quality mp3 video converter that lets you extract mp3 from videos. 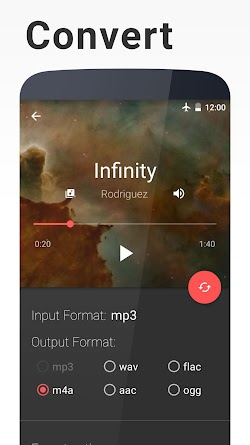 Timbre prides itself on being the most comprehensive audio editor and pro video editor app ever made. The most popular features of Timbre are the mp3 cutter & mp4 cutter. But it does much more than simply cutting mp3 songs or cutting videos, it also has the functionality of ringtone maker and MP3 video converter.

: This special function of Timbre’s audio editor allows you to quickly split any audio or video file into two parts.

: This operations lets you cut out a part from the middle of an audio or video file.

: With Timbre, you can quickly compress your mp3 or m4a files and pick a custom bitrate.

• You can also remove audio from a video

or convert a video to audio format

: Want to speed up an mp3 audiobook? Or make a slow mo video? With Timbre, you can change the speed of your audio or video files. 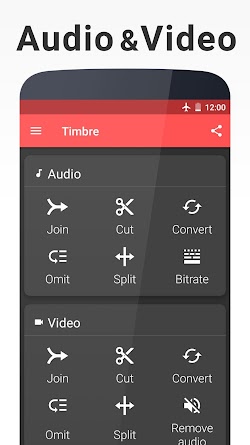 Let Timbre be your Action Director! Using the high quality and fast MP3 cutter (& MP4 cutter too!) that comes with Timbre you can easily and effortlessly edit your songs and videos to your liking! Timbre makes sure the output files are compressed and super small while keeping their quality intact and offering you all the VideoFX you can imagine!

Timbre makes use of the popular FFmpeg

library, the industrial standard of audio and video editing. Using FFmpeg codecs allows Timbre to support a wide variety of media types and not only that, the FFmpeg plugin is super fast and high quality. And guess what? There’s a raw FFmpeg console

built right into the app so that you can edit and fine tune the quality of all your songs and videos!

Finally, Timbre also allows you to convert text to speech! Timbre uses your phone’s built in Text to speech engine so that you can type or paste in any text you wish and Timbre will convert it into voiced speech. You can listen to it or you can export it as an audio file! Timbre includes all the audio/video features you can think of!

And guess what? Timbre supports a whole lot more than just mp3 and mp4 cutting and merging! Here’s a list of all the supported formats: 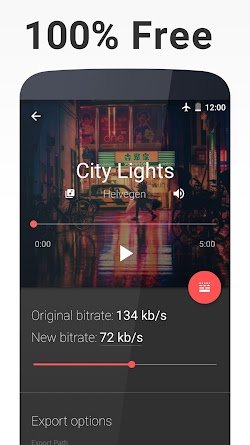