The best motion detection camera; it records video after motion is detected or just after the user clicks the record button. It can perfectly work even with the screen off 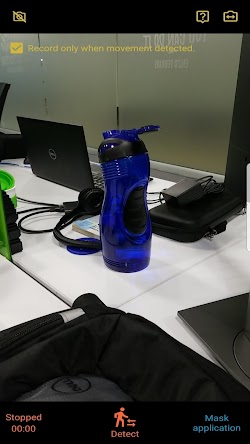 You can use MoCa as a regular camera (using the preview mode while recording/detecting) or you can use it as a background recorder (no preview will be shown in screen).

The background recording mode is perfect for saving battery, which will increase the record time; you can use this mode when using MoCa as a car dashcam (dashboard camera) or a security camera.

With MoCa you can define retention policy for storage saving; if you decide to store only 10 videos, when MoCa finishes recording the 11th video it will automatically delete the oldest one. You can also define the camera you want to use for the recording as the video quality. 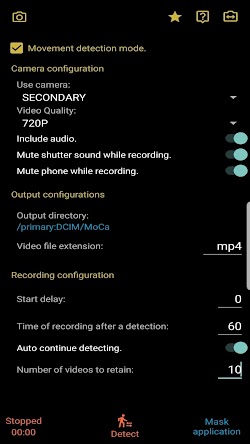 MoCa automatically stops recording when battery level is low or when there’s no enough space in the output destination, so videos won’t be corrupted.

MoCa also has a Widget which you can use for easily start and stop the recording/detection.

And how does it internally work?

When using MoCa as a motion detection recorder, when you press the “Detect” button, it will start detecting movement; when movement is detected, it starts recording video… the recording length will be the one defined in the settings; after that time reaches, video recording stops and the camera enters in movement detection again (if auto continue detecting is configured) until you stop or a new movement is detected.

If you use MoCa as a regular recorder, when you press the “Record” button, it will start recording video and will split the video every “Max video length” seconds; if you record during 5 minutes and have the Max Video Length configured to 60 seconds, it will produce 5 videos, each 1 minute length. 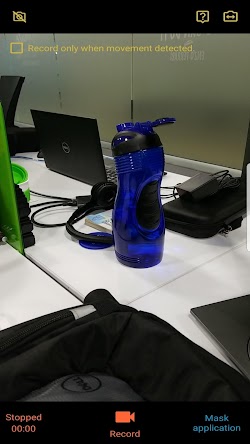 With MoCa paid version you can configure:

1. Use the highest quality for the recording.

2. Define a start delay for the detection/recording.

5. Change the output directory for the recordings. 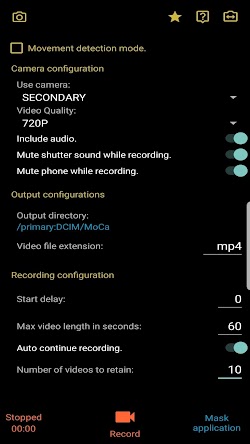 8. MASK the application texts and icons.

In free version (which includes ads) you can enable the paid version options for one recording/detecting session, just by watching an ad video (masking the application is not available in the free version).